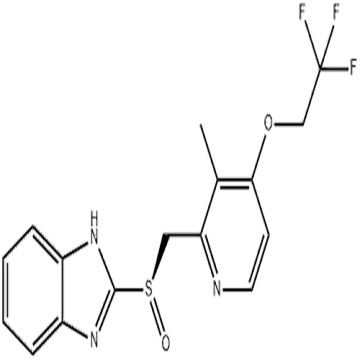 Description The mechanism of PPIs involves the irreversible binding to the hydrogen/potassium adenosine triphosphatase enzyme system, commonly referred to as the gastric proton pump, of the gastric parietal cell. As the last stage in gastric acid secretion, blockade of the gastric proton pump is an effective treatment for a variety of diseases requiring acid suppression, such as heartburn, peptic ulcers, and GERD. Dexlansoprazole is the latest PPI to hit the market, joining the ranks of omeprazole, rabeprazole, pantoprazole, esomeprazole, and lansoprazole, and is the Renantiomer of the racemic lansoprazole. Compared to its predecessors, dexlansoprazole exhibits improved pharmacokinetics with slower clearance and longer terminal half-life. In addition, dexlansoprazole utilizes a novel DDR technology; drug release is optimized through the use of granules with different pH-dependent dissolution profiles, thereby providing an initial release in the proximal small intestine within 1-2 h of administration followed by a subsequent release at distal regions of the small intestine several hours later. With its longer duration of action culminating in more effective acid suppression, dexlansoprazole may have an advantage over conventional PPIs that possess single release formulations (immediate or delayed). Similar to all PPIs, dexlansoprazole is a prodrug that consists of pyridine and benzimidazole rings with a latent sulfenamide moiety. In order to form the disulfide bond with cysteine residues of the proton pump, dexlansoprazole must be activated through two protonations followed by a spontaneous rearrangement to unmask the sulfenamide.

Uses Acts as a gastric proton pump inhibitor and an antiulcerative

Uses The R-enantiomer of Lansoprazole; a gastric proton pump inhibitor. An antiulcerative

Clinical Use Takeda Pharmaceuticals received approval of dexlansoprazole, a dual release formulation of the (R)-isomer of lansoprazol proton pump inhibitor (PPI) already in the market, from the FDA in January 2009. Dexlansoprazole is a delayed release capsule for the oncedaily, oral treatment of heartburn associated with symptomatic non-erosive gastroesophageal reflux disease (GERD), the healing of erosive esophagitis (EE) and the maintenance of healed EE. The dual release formulation is designed to provide two separate releases of medication, one at 1–2 h and then another at 4–5 h after treatment, for extended efficacy in the treatment of GERD.

Side effects The most commonly recorded adverse reactions that occurred at a higher incidence than placebo were diarrhea, abdominal pain, nausea, vomiting, flatulence, and upper respiratory tract infection. As dexlansoprazole inhibits gastric acid secretion, its use is expected to interfere with the absorption of drugs with pH-dependent oral bioavailability. Since the HIV Protease Inhibitor atazanavir is dependent on gastric acid for absorption, dexlansoprazole should not be co-administered with atazanavir to avoid a loss of therapeutic efficacy. While co-administration of dexlansoprazole did not affect the pharmacokinetics of warfarin or INR (international normalized ratio: the ratio of a patient s prothrombin time to a normal sample), there have been reports of increased INR and prothrombin time in patients receiving concomitant treatment with PPIs and warfarin. Since increases in INR and prothrombin time may lead to abnormal bleeding and possibly death, concomitant use of dexlansoprazole and warfarin may necessitate monitoring for increases in INR and prothrombin time.

Chemical Synthesis Similar to the synthesis of the chiral sulfoxide of armodafinil vide supra, the preparation of the chiral sulfoxide of lansoprazole utilized the catalytic oxidation method developed by Kagan and co-workers (the Scheme). Two routes have been reported that describe the preparation of dexlansoprazole on large scale. The first route developed by Takeda reacts commercially available thioether 29, also used to make lansoprazole, under the Kagan asymmetric oxidation conditions and the alternative route utilizes the cheaper commercial intermediate nitrosulfide 30 in the analogous asymmetric oxidation by Kagan). Thus, the catalyst complex consisting of (+)-DET, Ti(OiPr)4 and water was formed in the presence of thioether 29 in toluene at 30–40°C. The reaction mixture was then cooled to 5 °C and DIPEA and cumene hydroperoxide (CMHP) were added to give, after aqueous work-up and in situ crystallization from the organic layer, dexlansoprazole (VI) in 98% ee. No yield was given in the patent. An alternate, but similar, sequence was also described wherein the nitrosulfide intermediate 30 was subjected to similar oxidative conditions that gave intermediate nitro compound 31 in 80% yield and 98% ee. Compound 31 was treated with KOH and trifluoroethanol to provide dexlansoprazole (VI).

Shandong Yunfenglian Chemical Co., Ltd. is a comprehensive modern high-tech enterprise integrating R&D, production and sales of fluorine-containing fine chemicals, new chemical materials, and APIs. The company focuses on the field of high-end fine chemicals. The core products are positioned in fluorine-containing fine chemicals, and the focus is on the development of fluorine-containing pharmaceutical/pesticide intermediates, new chemical materials, and APIs. The company attaches great importance to the research and development of new products and strict requirements on product quality. For a long time, the company`s products have been favored by customers at home and abroad for their stable quality and reasonable prices. We will continue to provide the best product quality and the most reasonable The product prices and the most enthusiastic service to meet your needs and create our reputation.